In this weekly column, we revisit the gems of the golden years of Hindi cinema. This week we revisit V Shantaram’s 1957 film Do Aankhen Barah Haath.

Ten years had passed since India gained its hard-fought independence and the country was young, hopeful and ready for a glorious future. 1957 was the perfect time for V Shantaram to release his ultra-optimistic film, Do Aankhen Barah Haath, which captured the zeitgeist of a nation. The film tells the story of an open prison experience as jailer Adinath, played by Shantaram himself, takes six of the most dangerous convicts from his prison and moves with them to a farm. He cooks for them, works in the field with them, and takes care of them like his own family to prove that with love and respect even a killer can be transformed. This unique experience would be inspired by a real story that took place in the 1930s, as the opening text claims.

At the start of the film, we are introduced to Adinath as the kind of jailer who doesn’t believe in violence, even when his life is on the line. He chooses six hardened criminals, all of whom have committed brutal murders, as he takes them away. in Azad Nagar, where they can all live in an open house without locks and lead relatively liberal lives. It aims to transform their violent nature so that they can be part of civil society. Within minutes of being released from prison, one of the prisoners steals food from the local market and the others gather to eat it. Adinath appeals to their conscience, and voila, they throw the food away after just a few exchanges. My cynical self laughed a bit at the scene as I found it very unlikely, but it got me thinking later if it was about my grim worldview or the filmmaker’s feeling of seeing the good in each person. 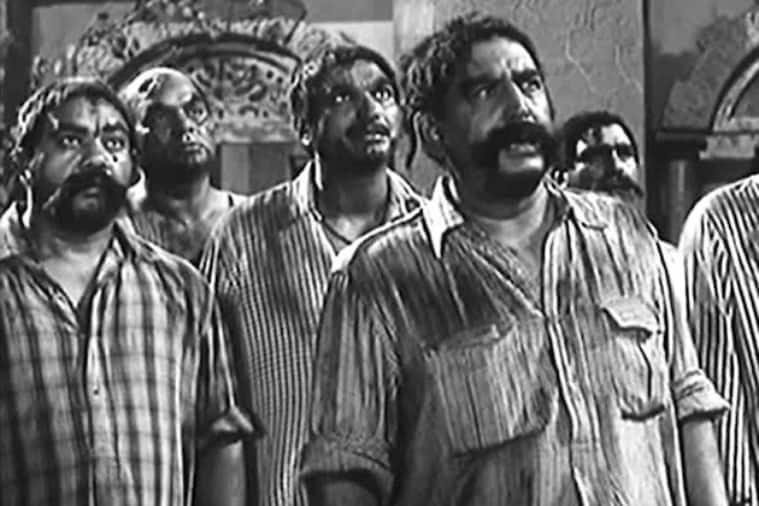 The film does not single out its six prisoners as characters but chooses to focus more on the concept of change.

The prisoners are men with dark pasts, but their collective actions are often those of obedient puppets. Whether it’s tying their own feet with chains to fall asleep as they usually do, or cultivating the land on their own, they are devotees in desperate need of a savior. The jailer, or better yet, their master, trains them to follow his orders and makes them excellent workers. In an important scene from the film, the prisoners decide to slit Adinath’s throat but change their mind at the last second. The bone of contention here is that one of the prisoners can have their children in Azad Nagar while the others are separated from their families. After appealing to their morals, the prisoner, whose children have become the center of this debate, throws his children out of the house and blames them for the mess. Since this is supposed to be an emotionally transforming scene, all of the prisoners come together and decide that they would help raise the children.

This is where we begin to see the flaws in Adinath’s plan. While Shantaram may not have wanted this, his characters don’t turn into rational beings, but just turn into fanatics who have their blinders on. Adinath doesn’t wave a wand to transform them into better individuals, but tames them. In another important sequence, the prisoners get drunk and attempt to rape Champa, the toy-selling woman who often comes to their home to look after the children. Before this scene, they constantly let go but being intoxicated pushes them further. Adinath intervenes, and so the men turn to him with weapons in hand. The situation is spreading one way or another, but as members of the public, we realize that it is almost impossible to change someone’s nature, or what you might call ” fitrat ”, but that is certainly not what Shantaram wanted. The prisoners plan to slit Adinath’s throat when he is shaved.

Shantaram’s message here is quite simplistic – if you spread the message of love, it will change the world. But watching the movie today comes with its fair share of cynicism. We know the world is not as black and white as Shantaram expects us to believe with Do Aankhen Barah Haath, but it is understandable why a young country like India in 1957 would have needed this hope. For a society that was still learning to be independent after centuries of colonialism, we needed ambitious stories and Do Aankhen Barah Haath was just that. The plot of the film seems unrealistic in our time, and was probably unrealistic then as well, but for these two eras it’s a story of hope and the pursuit of good in other humans.

Speaking of optimism, Do Aankhen Barah Haath is the movie that gave us the prayer “Ae Malik Tere Bande Hum”. Long before many of us found out that there was a filmmaker named V Shantaram, or that he ever made an experimental film in the 1950s, we knew the lyrics to this song. Written by Bharat Vyas, the verses of the song are about the imperfections of humans and their reliance on higher power to lead them to the light. Composed by Vasant Desai and sung by Lata Mangeshkar, the song carries the theme of the film as it emphasizes faith as the strongest power.

Do Aankhen Barah Haath is a historic film for Indian cinema as it was the first Indian film which won the prestigious Berlin Film Festival and also won at the Golden Globes. Watching the movie today you might find some of the performances a bit theatrical, but it’s still the essence of the movie that matters. From a technical point of view, the film’s use of light and shadow in pivotal scenes is a masterclass in cinematography. Cinematographer G Balkrishna and Director Shantaram make effective use of light in the scene where drunken prisoners decide to attack Adinath with agricultural implements. You don’t see their faces here, just the shadows of great men who aren’t themselves, at least that’s what the storyteller believes.

Do Aankhen Barah Haath is the story that believes hope and faith can change the world, but it is not the story of our cynical times.

Do Aankhen Barah Haath is streaming on YouTube and ZEE5.