Bollywood Rewind | Sharada: Love that is beyond labels

In this weekly column, we revisit the gems of the golden years of Hindi cinema. This week we’re revisiting LV Prasad’s 1957 film Sharada.

Sharada is the story of a woman whose love requires no labels and has the power to maintain itself even under impossible circumstances. At the opening of the film, we are introduced to the main couple – Sharada, played by Meena Kumari, and Shekhar, tried by Raj Kapoor. Their dating-cutie and their jokes are all that a traditional romance entails, but their romance is anything but. In fact, Sharada is one of those movies that would be called way ahead of its time, even if it was filmed in 2021.

Due to circumstances beyond his control, Sharada ends up marrying Shekhar’s father and it shatters him completely. The two never divulge their relationship to anyone, but for the viewer, it constantly makes you wonder what could have been. In an important scene of the film, Raj Kapoor’s Shekhar is asked by his father to touch his mother Sharada’s feet and call him “maa”. The agony on his face makes you catch your breath as he realizes that his beloved has now taken the deified place in Indian society. Watching the film today, one might wonder that since she married her father she is just a stepmother and far from being his real mother, the filmmaker would argue otherwise. The film was made in the 1950s when our society, which always treats its neighbors like parents, didn’t really distinguish between mothers and mothers-in-law. 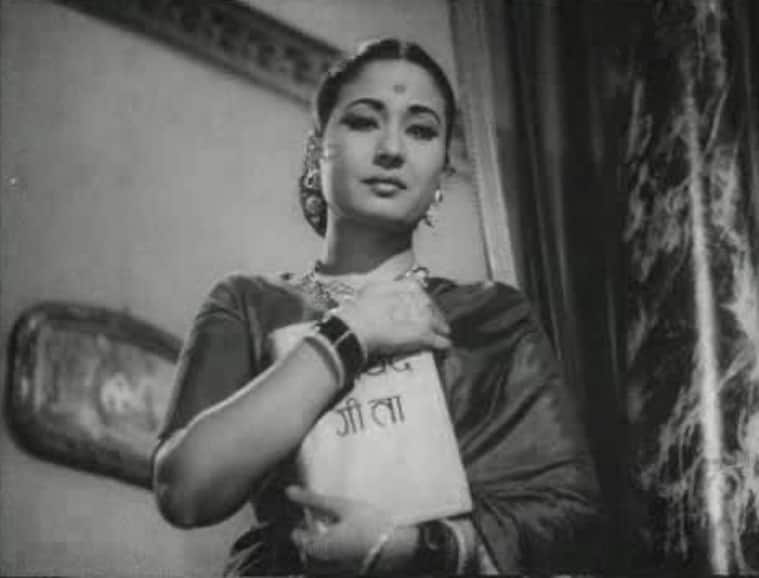 Sharada’s acceptance of his fate is presented as his duty.

Sharada’s relationship with Shekhar begins as romantic, becomes vengeful and tragic, but ultimately takes the form of an acceptance. The part of the movie where Shekhar moves on, gets married, and lives happily under the same roof as her father and Sharada makes you wonder about the intricacies of their daily lives. Director LV Prasad does not answer the viewer’s questions in detail, but watching them coexist and accept each other in any capacity, forces you to think about the vast range of relationships that can be developed, without defining them. The more you think about the love shared by Shekhar and Sharada, the more you can’t help but think about the almost spiritual nature of their relationship.

Director Prasad, like many others of his generation, gives Sharada the place reserved for “devi” from the start. She is respectful and almost perfect in every sense of the word, which is why it seems a bit unnatural that we never see her deal with her feelings when trying to accept Shekhar as her stepson. It’s a little shocking to get her to accept it almost instantly, like it’s her duty. It’s evident that from the gaze of a man (the director in this case), a woman taking on a mother’s mantle should only be perfect, and Prasad hammers it throughout the film. But, his treatment of Raj’s Shekhar is radically different. He falls into alcoholism, takes his time to come to terms with how life has deceived him, falters and fails, and ends up taking his own. This sharp distinction between the treatment of these two characters says a lot about how male and female characters are viewed and what is expected of them. Women are expected to accept whatever is thrown at them, but men can rebel, complain and take their time to accept the card given to them.

While the common thread of Sharada’s story is strong enough to capture your mind for days on end, the film has its lows. The film’s subplots didn’t necessarily age well and that includes the story of Chanchal’s family (Shekhar’s wife, played by Shyama). Show a decisive woman (Chanchal’s mother) pejoratively, or an alcoholic man (Om Prakash) repenting for his actions on his deathbed, or even a figure as important as Shekhar’s father walking around completely oblivious to the situation around him, makes them all look like one-note characters.

Sharada is the kind of love story that makes you question your understanding of love and how meaningful relationships can exist, even with the strangest labels.