Arjun Mathur prefers roles that think outside the box and break the clutter, be it I Am, My Friend Pinto, Coffee Bloom or Fireflies, every movie had Arjun playing roles that had deeper meaning.

With a career spanning 15 years, Arjun has built up work over the years that deserves to be noted. And adding a feature to his cap was an Emmy nomination for Best Actor he received last year, for starring in Amazon’s original web series, Made in Heaven. . The show is currently in production for its second season.

Arjun has become a regular face on digital media, having also completed web projects like The Gone Game (Voot) and Silence… Can You Hear It (ZEE5).

All of this is the highlight of where Arjun began his acting journey. Here’s what the actor shared on his first acting gig.

My professional acting debut was in a short film Migration, directed by Mira Nair. It was in 2007 and I was between 25 and 26 years old. I played Irrfan Khan’s lover in the movie. I had just graduated from theater school and had been deputy director for a few years. Then I started touring with my photographs, auditions and everything. One day I got a call from Loveleen Tandon, who called me to audition for this movie. I remember her face lit up when she saw the audition itself. So I knew it had gone well. And then by chance, the same evening, I went to PVR Juhu for the screening of The Namesake by Mira Nair. There, during the interval, someone tapped me on the shoulder, and it was Mira Nair. She asked if I was Arjun Mathur and said she liked my hearing but they couldn’t get me started because I looked like I was too young with Irrfan. But the next day I got a call again. I guess they went back and forth to see if it would work or not, and they finally decided to come with me. People ask me why you chose this movie. I’m saying who wouldn’t.

I only had two scenes in the movie and I played one during the audition. Cut to the same year at the Toronto International Film Festival. I will not forget Mira Nair who introduced me on stage as her discovery. It was a really proud moment.

My first day of shooting was near Metro Cinema, in a run down hotel. I think it’s called the Grand Hotel, or something like that. The first scene I had to shoot was the situation where Irrfan catches me with someone else. He confronts me and I had to tell him to mind his business, it was my life. And I had to yell at him. It was a great day and I know I did very well. Everyone also told me how successful I had been.

There weren’t a lot of covers, if I remember correctly. I won’t say nervous because that’s what I came here to do. So beyond all the nervousness, there is only excitement. Surely it is disconcerting to be up against Irrfan Khan and to be directed by Mira Nair in your first film. It’s overwhelming, but it’s okay, you have to get over it and be grateful for where you are and give it your best. 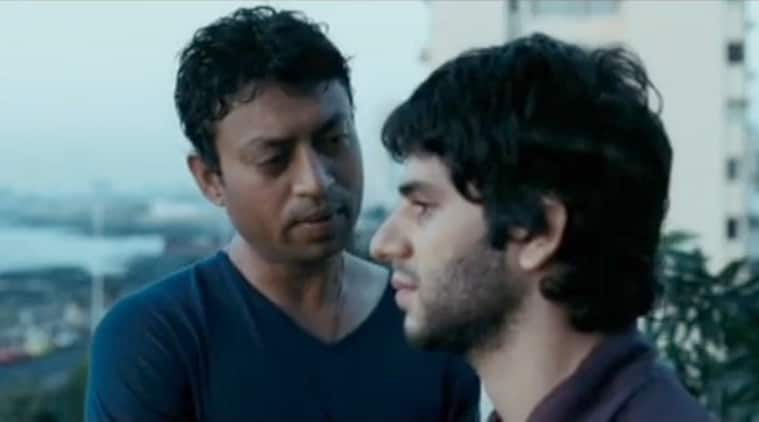 Arjun Mathur with Irrfan Khan in a Migration still.

The first day, it was only Irrfan. On my second day of filming, there was also Sameera Reddy. I haven’t met much Irrfan sir over the years except a few screenings here and there and it was cordial. Mira and I have been in contact ever since. We share an unsaid and a very special bond. With Sameera, it’s been a very long time. This film was also written by Zoya Akhtar, with whom I am in contact until today.

No, I don’t think so. I’m not looking back and think it could have been better. Things are as they are. And they are special.

I loved Amitabh Bachchan, Anil Kapoor and the Three Khans when they came. I grew up watching these people, and they really made an impact on what I do. I loved all of Amitabh Bachchan’s classics – Satte Pe Satta, Ajooba, Mard, Zindagi Ek Juaa from Anil Kapoor, Janbaaz and other obscure ones. I don’t watch enough Hindi movies now, but I grew up as a real Hindi movie buff.

When I arrived in Mumbai and started working as an assistant director, I started to grow and evolve. Then I was drawn to a different kind of skill.