If Raj Kapoor’s Sangam were made in 2022, he would be the villain, not the hero. here’s why

When Raj Kapoor established RK Films at the age of 24, he was considered a pioneer. Throughout the 1950s, film after film, RK Films produced films that were loved by audiences, and in addition to being entertaining, they were socially conscious. While these movies can get a bit preachy at times, they forced the audience to examine their surroundings while starting a conversation about the issues facing the common man. But as the 1960s progressed, RK Films opened a new chapter. Now when Raj Kapoor took on the role of director, he dabbled in a plethora of subjects, some of which haven’t aged too well. The first film directed by Raj Kapoor during the decade was his first color film. With himself, Vyjayanthimala and Rajendra Kumar, the film was Sangam.

Sangam has everything an RK banner movie was known for – a great cast, accomplished actors, and melodious music. The film even offered its audience a vacation to Europe via their visuals, which was quite significant at the time because few films were shot overseas, and it was a big draw for movie-going audiences. But watching the movie again, it’s obvious that Sangam has over three hours of male privilege shoved down the audience’s throat. Let me explain why. Vyjayanthimala’s Radha continues to reject Sunder’s advances but he keeps pushing his buttons.

Sangam has Raj Kapoor playing Sunder, Vyjanthimala playing Radha and Rajendra Kumar playing Gopal. Sunder has been in love with Radha since they were little, and his obsession has followed him into adulthood. So much so that when he asks her if she will ever be with him in the song “Bol Radha Bol”, she says a definite no, but he won’t take that for an answer. Whether it’s stealing her clothes while she’s bathing in the lake or almost abusing her when she says she just doesn’t love him, he just doesn’t back down. He shows up at her house when he wants, pushes her on a date when he feels like it, and just assumes that a love letter she probably wrote is meant for him.

Reading this in 2022 must give you the impression that Sunder is the villain of this story, but that’s where you’re wrong – Sunder is the “hero” of this story who faces no repercussions for his actions and is in fact “rewarded” in the film. It’s just not possible for a movie to have only morally right characters, but when objectionable characters are rewarded for their problematic behavior, that’s when you start to wonder about the conditioning of the movie’s audience. Hindi.

The events of the film take various bizarre turns, including Sunder becoming an Air Force officer, him going to war to prove Radha worthy and later being presumed dead. In the meantime, Radha and Gopal, who have been in love from the start but haven’t acted due to Sunder’s constant interference, are set to get married. Well, it turns out Sunder isn’t dead and as soon as he returns, Gopal “sacrifices” his love so Sunder can marry Radha. In all of this, there isn’t even a single scene where Radha is asked about her wishes, and that’s the woman who recoiled at the thought of being with Sunder. But as is the case in Hindi films often written by men, Radha turns into pativrata patni in just the next scene! The movie doesn’t care what Radha wants, and at no point does it even pretend to care about her.

Radha is metaphorically tossed between the two best friends, until the final 15 minutes of the film where she finally asks if she’ll ever have a say in the matter, but as expected no one cares what she thinks. Men do what they want and Radha is just supposed to love her husband because that’s what sanskari women do.

It’s so shocking to see a female character in a Raj Kapoor film who does absolutely nothing but dream of being with her lover, or later prance across Europe with her husband. I say shocking because female characters in films previously directed by Raj Kapoor had purpose and agency. In Awara, Nargis is a lawyer who also happens to be at the center of the love story. Her profession is not only a label for her, but also serves an essential purpose in the story. In Shree 420, Nargis again plays a morally upright school teacher who walks away from his beloved because he is a dishonest man. So it’s shocking that Vyjanthimala has absolutely no character arc in the film other than being someone’s love interest. 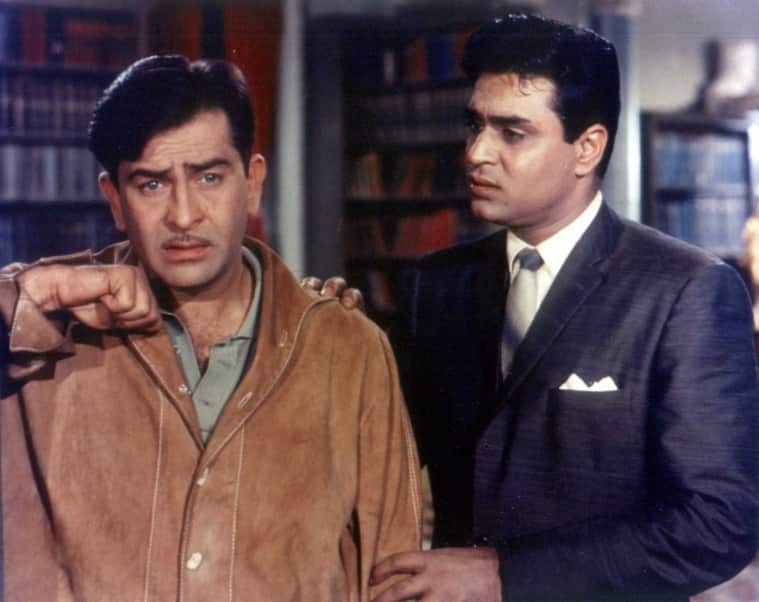 Sunder and Gopal are best friends who both love Radha, but neither cares about her wishes.

Raj’s Sunder, who has all the red flags to watch out for, has finally married the woman he’s always dreamed of, but as soon as that’s done, he’s a changed man. On their first anniversary, he finds an old love letter and begins questioning his wife as if she were a stranger. She is heartbroken, embarrassed, and wants to prove her innocence, but he implies that she’s probably been with other men. And at this point, you wonder if this “hero” ever deserved the love of his life, and more so, a movie.

Sangam is a love triangle that was meant to appeal to the masses, and the remarkable part is that it did. The movie is still remembered for its evergreen music, and a few years ago it was reported that the movie might be heading for a remake (thank goodness we haven’t heard anything more about that). As problematic as Sangam now seems, it’s worth noting that 1960s audiences were exposed to a limited worldview, but for a filmmaker of the caliber of Raj Kapoor, who was making saner films in the 1950s, Sangam seems to be A step back.