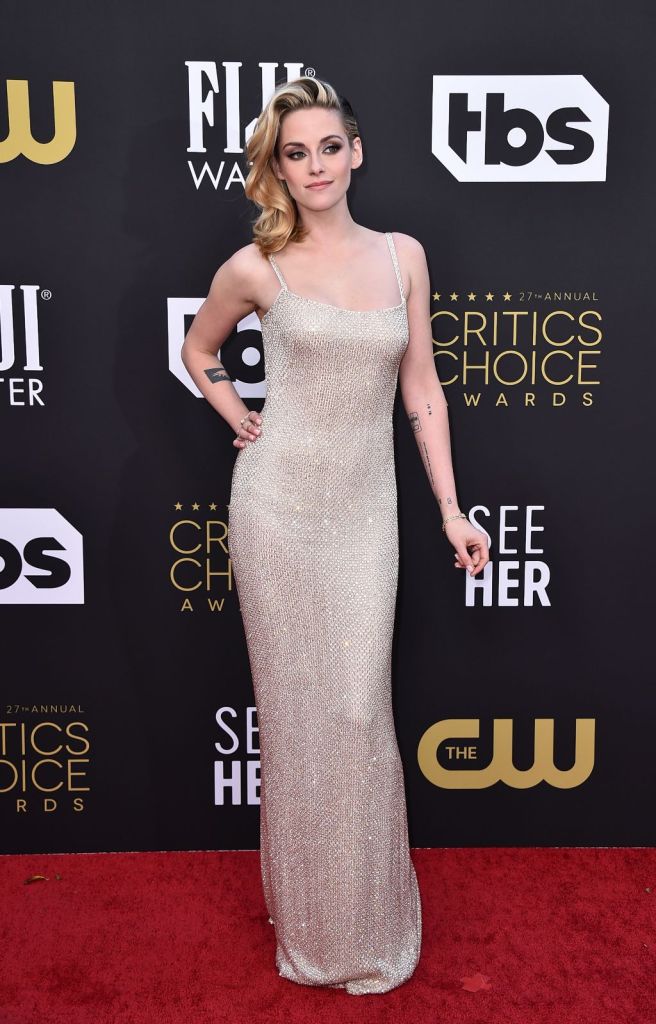 Kristen Stewart made a stylish arrival at the 27th Annual Critics’ Choice Awards on Sunday in Los Angeles. Stewart is nominated for Best Actress for her portrayal of Princess Diana in “Spencer.”

The award-winning actress graced the red carpet in a figure-hugging gold dress. Stewart exuded Hollywood glamor as she coordinated the shimmering skintight number with soft curls that were swept to the side of her face. To elevate the moment even more, the ‘Charlie’s Angel’s’ star added a sultry smoky eye and a rosy pink lip. To ensure that the focus would be on her dress, she opted for minimal accessories.

The length of her dress made it difficult to get a glimpse of her shoe choice, but it wouldn’t be surprising if she topped it all off with heeled sandals or pumps. For red carpet looks, Stewart tends to turn to pointy-toe pumps and strappy sandals. When it comes to fashion, the filmmaker has a chic sartorial sense. Stewart often wears structured pieces and printed pieces that match her distinct interests while adding her own twist to popular trends. As Chanel’s ambassador, the fashion house is often her go-to choice.

The Critics’ Choice Awards reward the best cinema and television images and performances of the year. This year’s event, hosted by Taye Diggs and Nicole Byer, will be broadcast from Los Angeles. The main film categories are ‘West Side Story’ and ‘Belfast’, while the TV portion is led by ‘Succession’. The Critics Choice acting categories are led by stars from most nominated projects, including Lady Gaga, Kristen Stewart, Will Smith, Ariana DeBose, Kirsten Dunst and Andrew Garfield.