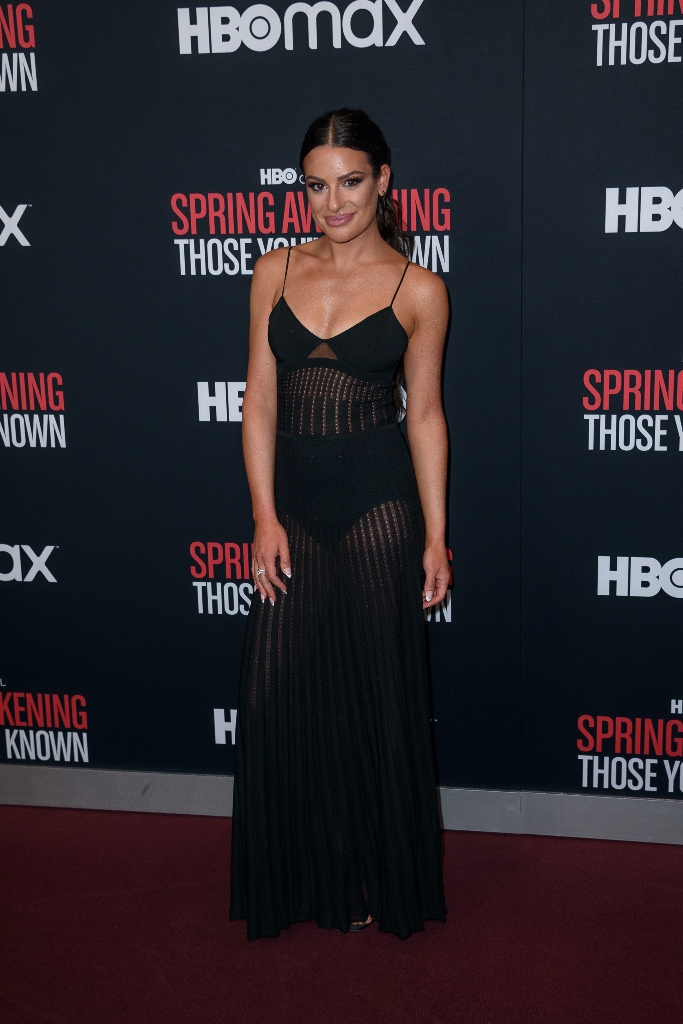 Michele was just 19 when the play premiered on Broadway, and the documentary details her meteoric rise that would establish her cast as stars. His role was opposite Jonathan Groff, who was 21 at the time of the play, and who would later star opposite Michele in “Glee” as well.

The dress, which Michele wore on the red carpet, was a stunning floor-length pointelle knit number. Since it was translucent, Michele’s stylist, Brian Meller, opted to complete the look with some flattering high-waisted bikini bottoms. The dress featured spaghetti straps, an A-line silhouette and a plunging V-neckline in lined cups. She coordinated with a black pointed sandal, the silhouette of which protruded slightly under the skirt.

To further nail the look, hairstylist DJ Quintero created a striking low ponytail with a middle part. From the back, the hairstyle featured voluminous waves that cascaded down Michele’s waistline. The sleek style made the dress stand out and allowed Michele’s smokey cat-eye makeup to shine almost as brightly as the dress.

Meanwhile, Groff wore a perfectly tailored navy blue suit with a black crew neck underneath and dark dress shoes. It was the perfect complement to Michele’s dress. The premiere brought together most of the original cast of the play, who also took part in the documentary.

“Spring Awakening: Those You’ve Known” premiering on HBO at 9 p.m. ET on May 3. The revealing documentary will then air on HBO Max.

Discover Michele’s style through the years in the gallery.