In 1983, when Bhanu Athaiya won an Oscar for costume design for his work on Gandhi, not everyone in Hollywood was thrilled.

Not to mention the army uniforms.

Gandhi – a three-hour saga spanning over half a century of politics, protest, and steadfast non-violence in the life of Mahatma Gandhi (Ben Kingsley) – was anything but a fashion show.

Some Indian moviegoers have complained that everyone looks so ordinary, from actors – including John Gielgud, Martin Sheen and young Candice Bergen (playing the role of American photographer Margaret Bourke-White) – to the thousands of extras. dressed for crowd scenes.

But Athaiya (pronounced ah-THIGH-yah) knew the value of his work.

“Richard Attenborough was making a complex film and needed someone who knew India inside out,” Athaiya told Eastern Eye, a British weekly, in an interview published last year. “You had to contribute a lot and I was ready for it.”

Gandhi won eight Oscars, including Best Picture, Actor and Director. And when the costume design award went to Athaiya – sharing the honor with British designer John Mollo – she became the first Oscar winner in Indian history.

Bhanumati Annasaheb Rajopadhye was born on April 28, 1929 in Kolhapur, Maharashtra, known as the city of the arts, in British India. She was the third of seven children of Annasaheb Rajopadhye, painter and photographer from a wealthy family, and Shantabai Rajopadhye. His father died in 1940. 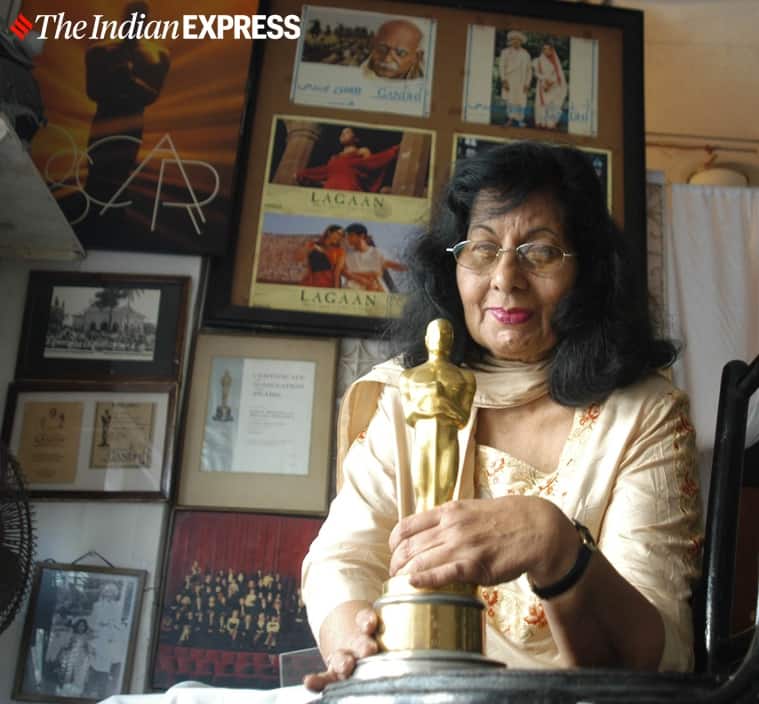 When the Oscar for costume design went to Athaiya – sharing the honor with British designer John Mollo – she became the first Oscar winner in Indian history. (Photo: Express photo by Dilip Kagda)

After graduating from school at age 17, Bhanu moved to Bombay (now Mumbai) and stayed with a woman whose mother worked for Eve’s Weekly, a popular magazine.

“They saw my sketches and could tell my hand was good,” Athaiya told Eastern Eye, adding that she “had been drawing from a very young age.”

Her job as a magazine illustrator led her to a job in a boutique, where she began to create her own designs, although she never attended fashion school. This brought her to the attention of the Indian film industry.

“The best stars started approaching me and recommending me to filmmakers,” she told The Indian Express in an interview published last year. In another interview, she summed up her career: “I never had to knock on doors.”

She made her film industry debut in Raj Khosla’s CID (1956), a murderous black-and-white drama (with musical numbers, of course), around the middle of the golden age of Bollywood. She went on to design costumes for more than 100 films over nearly six decades.

They have included some of the best Hindi films, like Guru Dutt’s Pyaasa (1957), about a struggling poet and the whore who believes in him; Guide by Vijay Anand (1965), on an unfortunately married woman and a former tourist guide in search of spirituality; Ashutosh Gowariker’s Lagaan: Once Upon a Time in India (2001), which combined cricket uniforms, military uniforms, and women’s fashions from late Victorian England; and Swades by the same director (2004), about a modern scientist returning to his childhood village.

She considered herself a creative director. She despised stars who tried to dictate costume decisions and designers who put their own fame above movie quality.

Athaiya received particular praise for her designs for actress Sridevi, angelically dressed in white in Yash Chopra’s Chandni (1989); Zeenat Aman as a physically and mentally marked wife in Satyam Shivam Sundaram (1978); Vyjayanthimala in the fantastic Amrapali (1966); Mumtaz, doing the twist in fancy party scenes in Brahmachari (1968); and Waheeda Rehman, one of the creator’s favorite actresses, in Guide.

She said she loved her film career because it allowed her to create designs for period images and contemporary stories.

“And he has a timeless life,” she told Eastern Eye, “as fashion comes and goes.”

She married Satyendra Athaiya, a lyricist and poet, in the 1950s. (She changed her billing from Bhanumati to Ms. Bhanu Athaiya in 1959.) According to The Times of India, he died in 2004.

India can now claim eight Oscars, including two for the 2008 film Slumdog Millionaire (score and sound mixing), an honorary Oscar in 1992 for director Satyajit Ray and several technical awards.

In 2012, after learning that she had a brain tumor, Athaiya returned her Oscar statuette to the Los Angeles Academy of Motion Picture Arts and Sciences for safekeeping after her death.

His last film was Nagrik (2015), a mystery about casually dressed criminals. She was the author of The art of costume design (2010).

The Oscar was not Athaiya’s only grand prize. She won the National Award for Costume Design of India twice, for Lekin… (1991) and for Lagaan a decade later, and the Filmfare Lifetime Achievement Award in 2009.

Working in film, Athaiya said in an interview with The Indian Express, “has become a way of expressing myself and letting my imagination fly.”

“It was so satisfying that I didn’t feel the need to do anything else.”