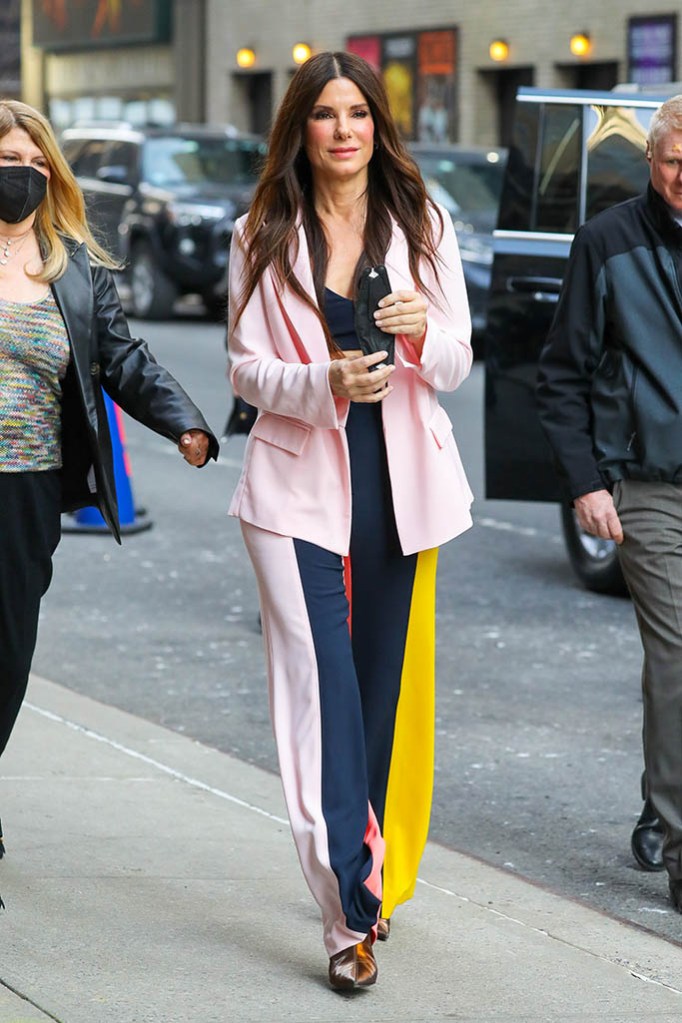 Sandra Bullock showed off her chic sense of style during an appearance on “The Late Show With Stephen Colbert” Monday night in New York City. The Golden Globe winner stopped by the late-night talk show to talk about her new movie, ‘The Lost City,’ which hits theaters March 19, and hypothetical storylines for a potential ‘Speed’ sequel. .

“I’d be happy to sit in any vehicle with Keanu Reeves. Like I said before, I think we should be really old and in a motorhome. He’s driving this time and I’m telling him how driving and we argue. And the whole thing is just cars trying to drive around us all the time and we just part ways along the freeway. I think that could be silly and sexy,” Bullock said.

As for the outfit, Bullock served as a major inspiration for the spring style. The “Bird Box” star wore a pale pink suit completed with a double-breasted jacket over a navy crop top. She paired her top with multicolored Lela Rose pants. Her pants were the highlight of her ensemble as they were enlivened by thick yellow and hot pink stripes on the side seams.

To anchor it all, the award-winning actress slipped into a pair of copper boots. The silhouette featured a pointed toe and a pointed stiletto heel. Shortly after her appearance, Bullock was spotted in shoe style as she headed to the New York screening of “The Lost City.”

Bullock traded in her power suit for a black long-sleeved dress by Stella Jean. The garment was complete with sequined floral embellishments to the front. To let her dress do the talking, she opted for minimal accessories and styled her signature brunette hair in loose waves.

Check out Bullock’s best shoe moments over the years in the gallery.