For a stretch late last year into the early months of this year, the most withering style assessments available online came in the form of Mark Boutilier’s very round, very calm, very expressionless face.

On TikTok, he used the app’s duet function, with which you can post a reaction video side by side with someone else’s, to quietly dismantle fashion offenders, maintaining an unchanging mien while would-be influencers flaunted amateurish looks or showed off absurd Supreme hauls.

On an app that often privileges the antic, Boutilier’s anti-takes became a wry course correction.

These placid, knowing clips helped to give shape to an emergent fashion discourse on TikTok among young men, one moving beyond the tightly curated fit pics and aggressively branded suffocations of Instagram into more discursive territory. TikTok, quick and nonlinear, is made for a fashion conversation that’s a cornucopia of interjections, humor duels and off-the-cuff lectures. 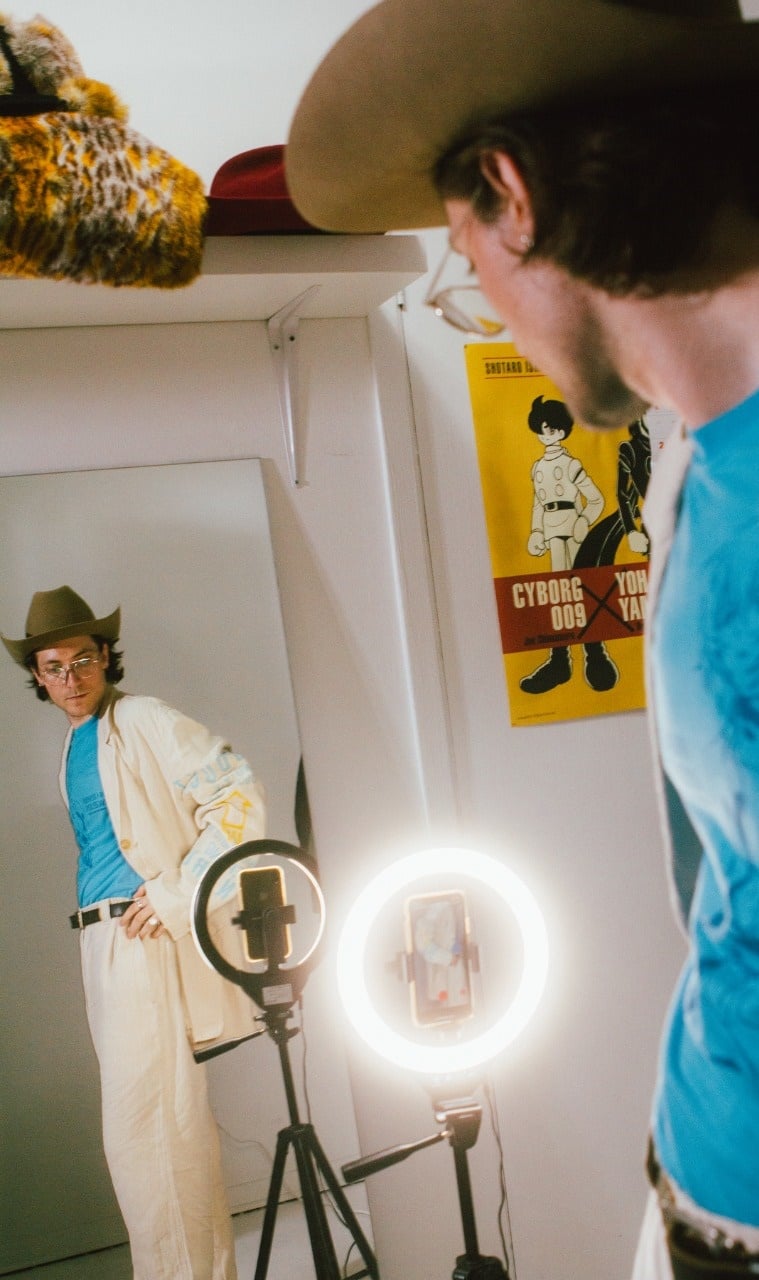 Offline: Recently completed a master’s degree in condensed matter physics and a second bachelor’s degree with a joint major in computer science and fine arts

Boutilier is one of a handful of young men, mostly in their early to mid-20s, using the tools and meme frameworks that are native to the app to create a fashion conversation that’s intimate, generous, a little frisky and constantly shapeshifting. Their videos, which take in outfit philosophy, historical archive, detached irony and helpful instruction, add up to an interactive, reassuringly informal and utterly modern iteration of fashion criticism.

“What I like about collecting fashion is it’s not very linear. It’s a very complex system, and what’s fun is making the connections. Many people are more into the idea of completeness, they’re looking for the end goal of something. In my case, I’m only invested in the whole process.”

The most studious and provocative avatar of this new approach is Etienne Bolduc (@thedigitalcowboy), a 27-year-old archivist and amateur fashion historian from Montreal. Bolduc specializes in Japanese designers — Yohji Yamamoto, Issey Mikaye, Rei Kawakubo, Naoki Takizawa — and his videos are a blend of archival documentation, yesteryear nitpicking and whimsical outfit flaunting.

Bolduc, who also operates a sophisticated vintage designer clothing web store and research platform called My Clothing Archive, is a true dandy with an advanced gift for silhouette and proportion. “Hyperrealistic” is how he described his approach to getting dressed, though he noted: “I focus a lot more on the cultural significance rather than the way they fit. The way I dress is about wearing cultural artifacts, cultural symbols.”

On TikTok, he’s a mischievous and zealous advocate for accuracy, often duetting videos with false information, and adding broader context to garments. “It’s not just about clothes,” said Bolduc, who has assembled a vast library of Japanese magazines and books, and taught himself Japanese well enough to translate them. “It’s also about trying to make connections with everything: music, photography, design.”

Bolduc is TikTok’s fashion free radical. By contrast, Joaquin Martinez (@fashion.elitist), 23, is the resident silhouette philosopher, serving up multiple video series on how to piece together “connected” and “disconnected” outfits, which clothing styles best complement different body shapes, and the most tasteful ways to deploy color. (Martinez, who lives in Los Angeles, generally dresses in all black, in garments that swoop and flow.)

He began disseminating his intellectual tool kit for how to approach getting dressed after becoming frustrated with the way that more established fashion influencers were showing off great outfits without any insight into how to assemble one. 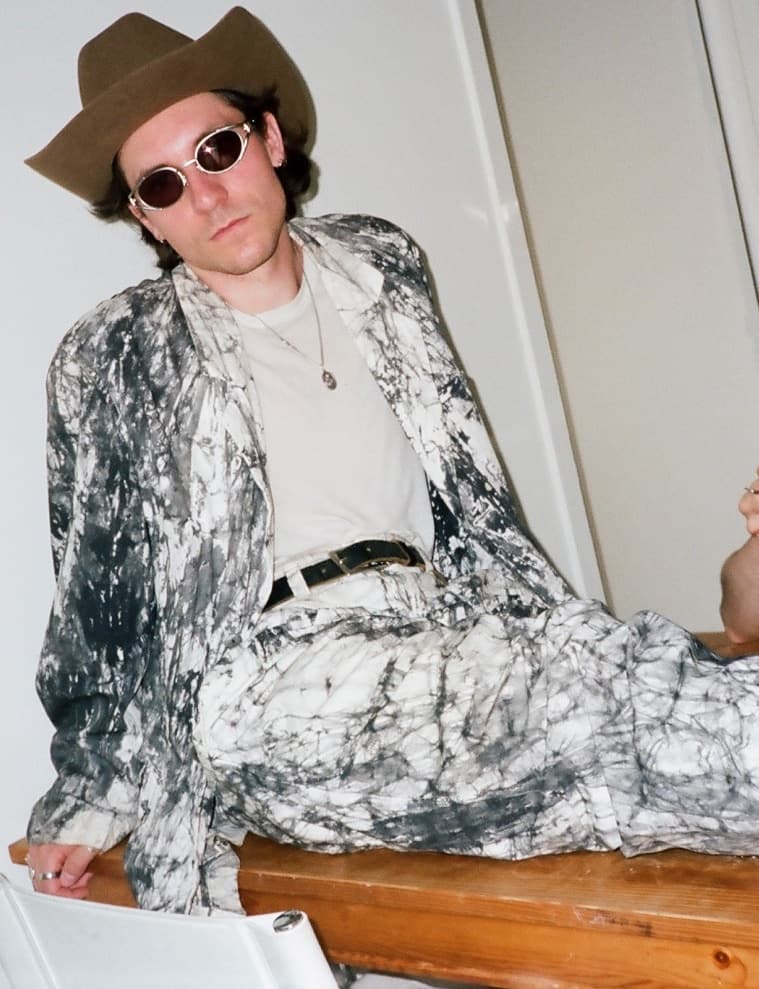 “When you practice a craft so much, you get so natural on it that soon enough you forget how you got there, and you don’t know how to explain it to somebody else,” Martinez said. “I do overanalyze stuff a lot, but I think this is the way I’m able to help others. Someone has to come up with the terminology and the explanation, just like your math teacher does.”

The scene’s satirist in chief is Boutilier (@mark_boutilier), who’s 23. In this ecosystem, he has become something of a human meme, whether it’s his bone-dry reaction videos; lazily wagging his finger up in the air toward a headline he’s about to subvert, an inversion of the TikTok mode of enthusiastic endorsement; or doing haul videos about hideous thrift finds.

An impassive observer to the great junkstream of hype and trend, Boutilier, who lives outside Atlanta, often found himself perceived as an antagonist in his early reaction videos. “There’s plenty of times where I did the video and then the original video would get deleted a couple of hours later,” he said. “I guess I’ve always been hard to read as like, ‘Is this guy joking or not?’”

“It’s more difficult to dress in black than it is in color. And it emanates confidence. The interesting thing about black is if I was walking down the street and someone was like, ‘I really like your outfit,’ I know they took the time to look.”

TikTok is an insatiable platform, and men’s fashion content abounds, much of it entry-level: style tutorials, product recommendations, video listicles and endless, endless amounts of fit pics, or fit videos, or videos of fit pics. There are established models, and models, like Wisdom Kaye (@wisdm8), who got their start by posting on TikTok. 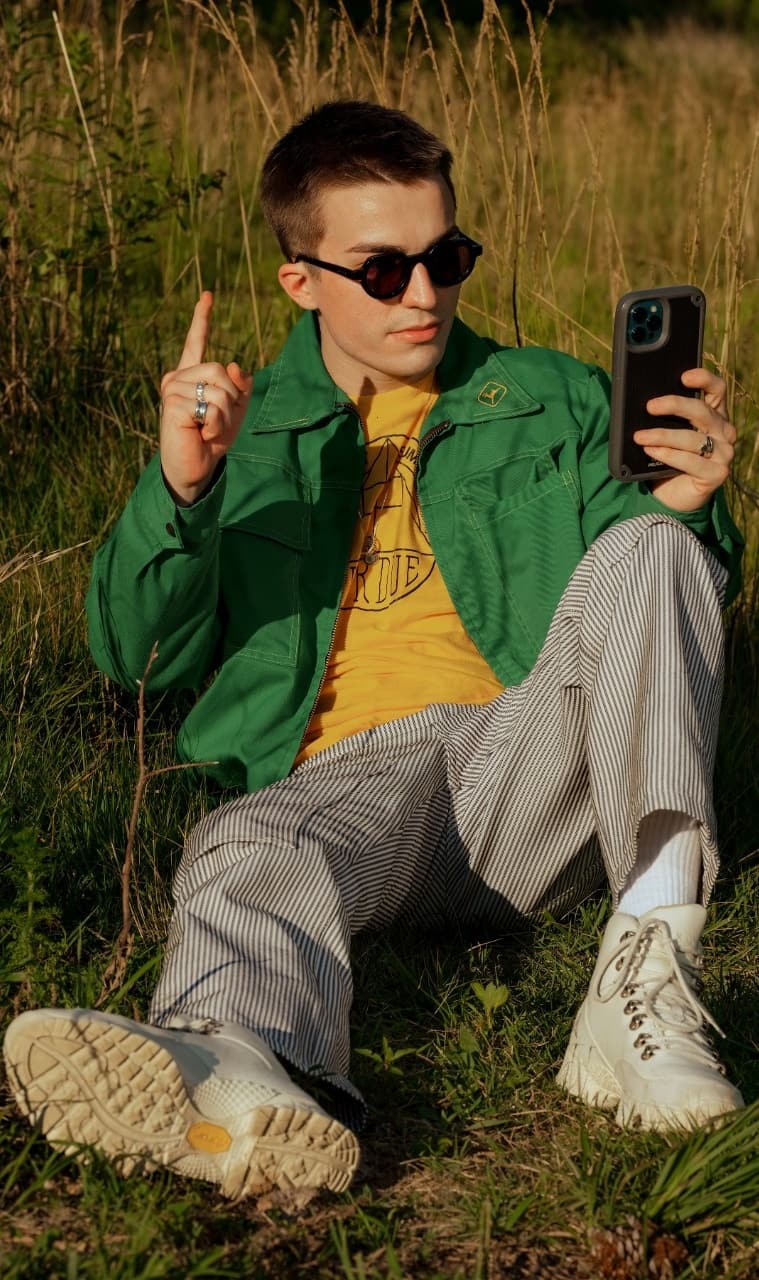 This niche of creators shares its own interests and language, though. They good-naturedly mock one another, poking fun at signature shticks. They uniformly roll their eyes at certain garments, like Comme des Garçons Play heart logo sneakers (“Heart shoe bad”). They debate the ethics of replica sneakers, or whether you can ever wear a jacket any way but open.

Many of these creators have built an impromptu community off the app, too: Martinez started a group chat on Instagram that now includes Boutilier, Bolduc and a dozen or so other TikTok fashion creators. The scene also has a native podcast, Pair of Kings, which routinely features the scene’s main players. Martinez recently posted a video of him slapping one of Boutilier’s stickers on a Fairfax Avenue storefront in Los Angeles, a gesture of cross-country good will.

This microscene is small and still pulses below the radar of most major fashion companies. Only in the past few weeks have some members been seeded with free product from brands, a familiar bench mark of influencer clout. But TikTok is still broadly viewed as an app for teenagers, and many established companies, deaf to the medium’s internal rhythms and in-jokes, still flail in figuring out how to present themselves there. (The awkward Ssense TikTok is a recurring joke among these fashion TikTokers.) And many of these creators aspire to something more noble, and less gratuitous, than pure attention and scale.

More than Twitter, which primarily foments arguments; Instagram, which is polished beyond feeling; or Snapchat, which functions largely in private, TikTok is the social media app best suited to an exchange of ideas. And because of the algorithmically shaped For You page, maintaining a curated viewing experience on TikTok is nigh impossible, which means TikTok creators tend to work more improvisationally. The result is a fashion conversation that zigs and zags, and thrives off rupture and then resolution.

“When you’re making stuff for Instagram, every little detail is kind of fine-tuned to a degree,” said Karsten Kroening (@meme_saint_laurent), a 20-year-old college student in Seattle who has been curating a fashion meme account of the same name on Instagram for the last five years. “It’s a lot more fun on TikTok.”

Crucially, he added, on TikTok “You can see someone’s face, when you establish a face and see their tone and how they’re speaking, even when they’re correcting you, it totally changes how we can have a conversation.”

That’s clear in the scene’s semiregular routine of correction, in which one user posts something erroneous, and another jumps in with a video or comment.

On TikTok, Michael Steinberg (@opaleyes369), who just finished his junior year of high school in Weston, Massachusetts, and favors pieces inspired by nature, is relentlessly positive, consistently pointing viewers to unlikely founts of aesthetic effervescence. On more than one occasion, though, he’s been nudgingly fact-checked by others in the scene.

“But the people who are correcting aren’t brutal,” he said. Even though Steinberg is younger than the others in the scene, he is welcomed. 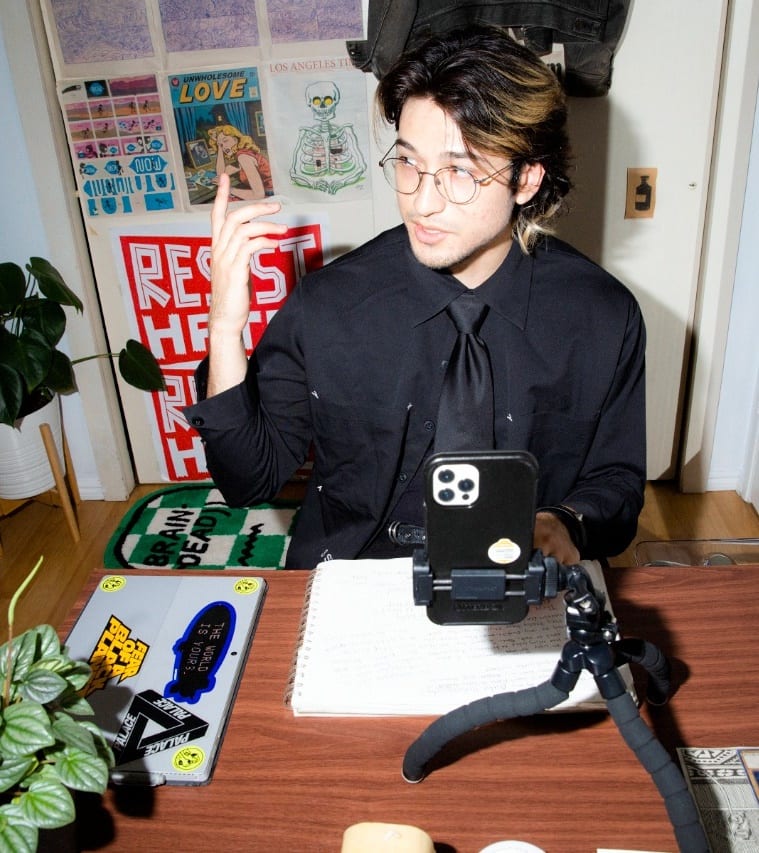 “When I was first on TikTok, there was pretty much zero fashion meme stuff or satire. It’d be people who would do the most basic takes ever, and people would be like, ‘Thank you so much, you saved my life.’ And I’m like: ‘Really? Am I the only one that’s like, “What the hell am I watching now?”’ That’s what provoked me.”

Iolo Lewis Edwards (@iolsi1), the director of High Fashion Talk, a multiplatform fashion community and now magazine, said that the interactive structure of TikTok is optimal for this kind of glancing pushback, both positive and negative. “The functions really encourage you to do that,” he said. “People are looking for prompts. It’s all open season to respond to anybody, and you know that going in.”

But the high potential for context collapse, in which videos are served to users beyond the originally intended audience, can lead to creators getting gun-shy. “It kills nuance, it murders nuance,” Steinberg said. This detail-oriented cohort of creators are at their peak when communicating among themselves, whereas fashion generalists tend to be embraced more widely.

For that reason, among others, Boutilier has moved away from deadpan reactions. “At some point you have to be like, now that I’m actually in this space where I kind of have, I guess you could say, influence, let me not be a total ray of negative light,” he said.

Just as this fashion microscene is finding its rhythm, it has been complemented by a cadre of young men who are using TikTok to demonstrate how they make their own clothes, creating what doesn’t exist as a means of critiquing what does.

Of these do-it-yourself videos, the most accessible, and soothing, are by Julian Carter (@juulian.c), a 24-year-old engineer in Huntsville, Alabama, with a taste for militaria and hyperfunctional clothing. Unlike creators who reveal their creation at the end of their clips, Carter chooses to open with the finished product to capture viewers’ attention. “Why would I follow a video when I don’t know what the end product is?” he asked.

His videos are crisp and alluring, and make extreme alteration — like fusing two pairs of pants into one or cropping several inches off a denim jacket — seem uncanny and easy. Even his evident stunts, like making a pair of pants with a 90-inch waist, are rendered without winks.

“When I first started, getting Mark’s approval was a thing,” Carter said. “People would be in my comments @-ing Mark.” (The two are now friendly.) Now Carter is his own center of gravity, and when he shows off a new technique, “I have people DMing me their own videos,” he said. His videos are lessons but also invitations, reactions that became prompts.

“I’ve actually been making stuff since I was in high school. ASAP Rocky was like the king at that point. It was Raf Simons, Rick Owens, all the designer brands. Of course, in high school I was never even thinking about affording that kind of stuff. A lot those brands are inspired by punk-type styles, and some of them are easily replicable. So I was like: ‘You know what? I can do some of this stuff.’”