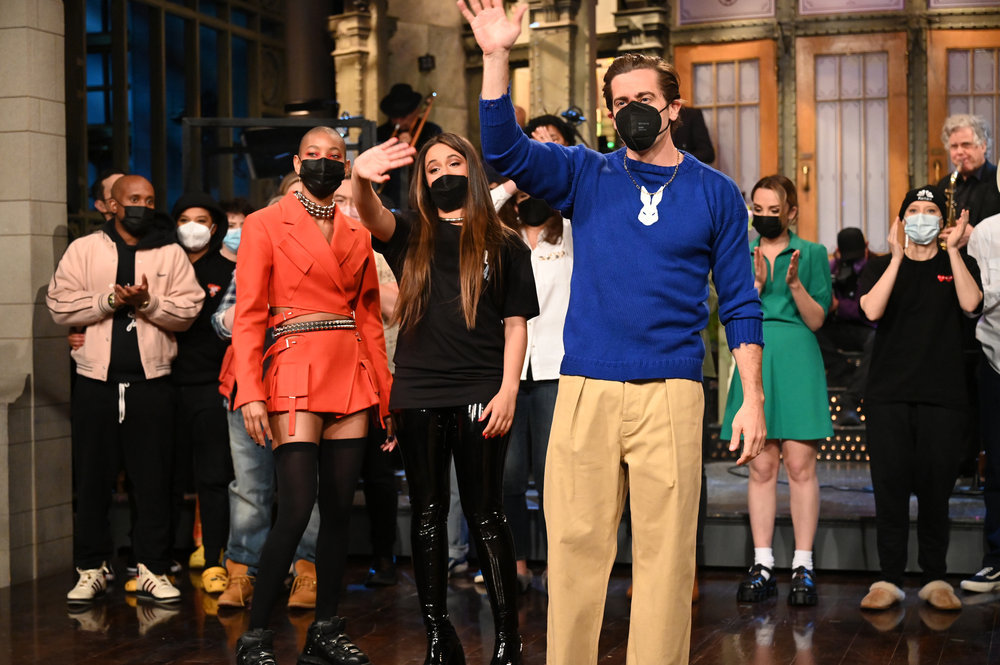 
Willow Smith made a rare appearance for a spectacular turn on “Saturday Night Live” last night.

The star joined Camila Cabello for a live performance of their new song “Psychofreak” – which they also released the edgy music video for this weekend – in this week’s episode, hosted by Jake Gyllenhaal. For the occasion, the “Wait a Minute! musician played guitar and sang in a utilitarian red miniskirt with large front pockets, paired with a matching cropped blazer with peaked lapels. The daring ensemble, coordinated with Cabello’s gloves, was accessorized with a studded belt, a long silver earring and layered pearl necklaces. Smith’s look was finished with sheer black thigh-high stockings from Wolford.

At the end of their performance, Cabello closed the duo’s musical set — which included lyrical references to their breakup with Shawn Mendes, their Instagram presence, and their split from Fifth Harmony — with an encouraging statement.

“Give it up for Willow, everyone!” Cabello proclaimed at the end of the song. You can watch their performances below:

Smith’s shoes went with her go-to shoe style: black boots. On this occasion, the star donned a pair of black platforms with thick soles. The style’s rounded big toes and heel counters created an exaggerated silhouette, while silver eyelet accents coordinated with her ensemble to cement her grunge roots. Similar platform boots have become the musician’s signature over the years in a range of textures and silhouettes, hailing from brands including Chanel, Louis Vuitton and Amina Muaddi.

Over the years, Smith has made a name for herself with numerous fashion endeavors aside from her stylish shoe wardrobe. The singer has starred in campaigns for numerous brands over the years, including Onitsuka Tiger and Stuart Weitzman — and even posed in Savage X Fenty’s Vol. 2 show. She’s also one to watch during fashion month, sitting front row for brands like Dior, Versace, Emporio Armani and Michael Kors.

Check out Smith’s starring role in Onitsuka Tiger’s Fall 2020 campaign in the gallery.