WRITER-ACTOR Shiv Kumar Subramaniam, known for his superb portrayal of a wide range of supporting characters in Hindi cinema for more than three decades, died on Sunday night. Described as “a gentle soul” by many of his industry colleagues and acquaintances, Subramaniam is survived by his wife, actress Divya Jagdale. He was 62 years old.

Subramaniam, whose last major screen appearance was Sanya Malhotra’s grandfather in the Netflix family drama Meenakshi Sundareshwar (2021), was cremated on Monday at Mokshdham Hindu Shamshanbhoomi in Andheri West. Many actors including Naseeruddin Shah, Nana Patekar and Makarand Deshpande attended his funeral. In February this year, Subramaniam and Jagdale had lost their 15-year-old son, Jahaan.

The news of his passing shocked not only those who knew him personally, but also many who admired his work in film, television and theater over the years. Filmmaker Anurag Kashyap called Subramaniam “the most generous and handsome man” he has known. Recounting meeting him in 1994, Kashyap shared how the writer-actor allowed him to watch the script for Auto Narayan (1996), originally written by Subramaniam. Later. Subramaniam asked director Shivam Nair to give writer Kashyap credit as well. “This is how I got my first screenwriting credit…I owe so much of who I am to Shiva Dada,” the writer-director wrote. 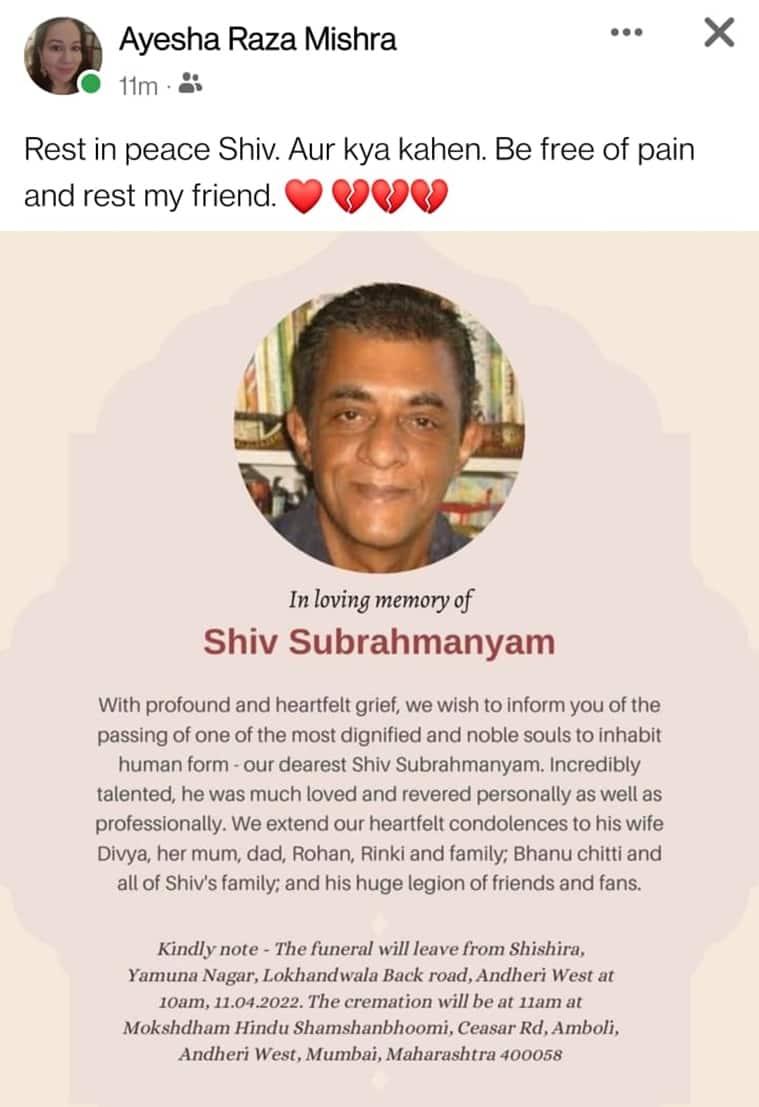 Subramaniam made his mark in the world of Hindi cinema with Parinda (1989), a moving crime drama set in Mumbai. In addition to playing Francis, gangster Anna’s henchman, he also wrote the screenplay for Parinda and worked on it as an assistant director. Over the years he has dabbled in a host of interesting characters in several much talked about films such as Prahaar (1994), 1942: A Love Story (1994), Droh Kaal (1995), Kaminey (2009), Teen Patti (2010), Stanley Ka Dabba (2011) and others.

Describing his passing as a “colossal loss for the theatre”, Pondicherry-based Adishakti Theater recalled that Subramaniam was part of their very first play, Oedipus. He also played Guildenstern in their next production, Rosencrantz and Guildenstern, a play by Tom Stoppard. Calling him “a mentor, an older brother, a dear friend”, actor-writer Vivaan Shah remembers him as “a great artist and a beautiful human being”. Many actors in the entertainment industry including Hansal Mehta, Manoj Bajpayee, Anil Kapoor and Amol Gupte expressed their shock at his sudden demise.